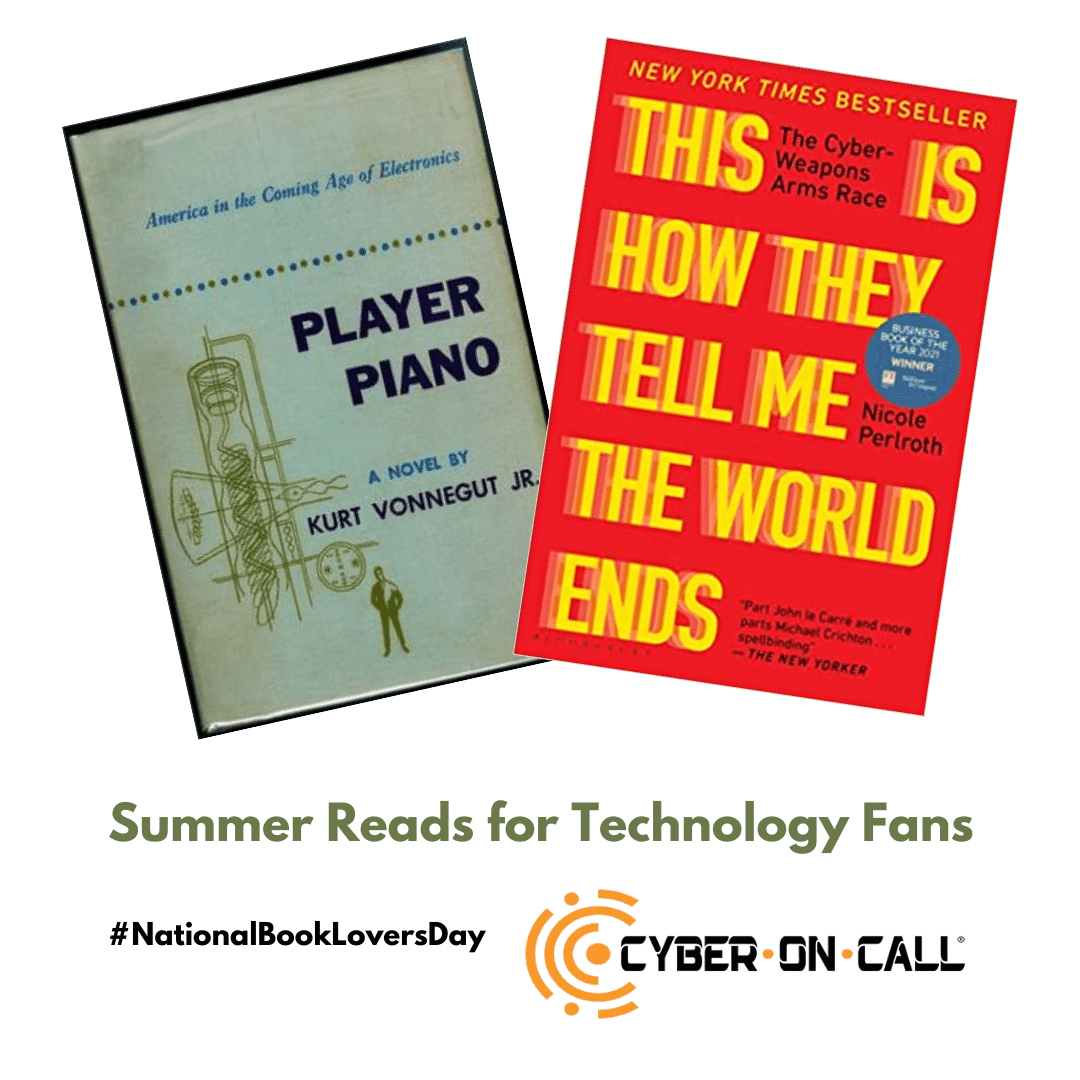 Hopefully, this summer, you will take some time to cool down with a good read. Whether relaxing poolside, on your favorite chair or in your local coffee shop, taking a break to recharge your brain with a novel or e-book can significantly increase your productivity at work and in your personal life. Herein, we list our favorite cybersecurity-themed novels.

Our CYBER-ON-CALL team is rediscovering Kurt Vonnegut’s first novel, Player Piano, and is taking a digital dive on Kindle into Nicole Perloth’s new cybersecurity-themed opus, They Tell Me This Is How The World Ends.

CYBER-ON-CALL’s complete recommended books for those interested in technology and cybersecurity-themed novels:

They Tell Me This Is How The World Ends: The Cyberweapons Arms Race, by Nicole Perloth

From The New York Times cybersecurity reporter Nicole Perlroth, the untold story of the cyberweapons market-the most secretive, invisible, government-backed market on earth-and a terrifying first look at a new kind of global warfare.

The Paladin, by David Ignatius

David Ignatius is a prize-winning columnist for the Washington Post. CIA operations officer Michael Dunne must infiltrate an Italian news organization that smells like a front for an enemy intelligence service. Headed by an American journalist, the self-styled “people’s bandits” run a cyber operation unlike anything the CIA has seen before. Fast, slick, and indiscriminate, they steal secrets from everywhere and anyone and exploits them in ways the CIA can neither understand nor stop.

Chase Cunningham takes the reader on a wild ride that demonstrates what could happen if a dangerous AI (Artificial Intelligence), capable of creating havoc on its own, is unleashed on the internet. This fast-paced read merges the cyber and physical spaces. gAbrIel is the first action-packed book in this cyberwarfare thriller series. If you like resilient heroes, technology, and intrigue, then you’ll love this book’s adrenaline-fueled rush.

In this exciting cyberthriller, investigative reporter Deb Radcliff tells a gripping story that raises important questions about invasions of privacy in a global bid for power through technology. A hacker war – 17 years in the making – erupts after GlobeCom takes over the world through human chip implants. Dozens of hacker strike teams around the world attempt to relieve GlobeCom of its iron grip on humanity through a coordinated attack on its data centers.

We use cookies on our website to give you the most relevant experience by remembering your preferences and repeat visits. By clicking “Accept”, you consent to the use of ALL the cookies.
Do not sell my personal information.
Cookie SettingsAccept
Manage consent

This website uses cookies to improve your experience while you navigate through the website. Out of these, the cookies that are categorized as necessary are stored on your browser as they are essential for the working of basic functionalities of the website. We also use third-party cookies that help us analyze and understand how you use this website. These cookies will be stored in your browser only with your consent. You also have the option to opt-out of these cookies. But opting out of some of these cookies may affect your browsing experience.
Necessary Always Enabled
Necessary cookies are absolutely essential for the website to function properly. These cookies ensure basic functionalities and security features of the website, anonymously.
Functional
Functional cookies help to perform certain functionalities like sharing the content of the website on social media platforms, collect feedbacks, and other third-party features.
Performance
Performance cookies are used to understand and analyze the key performance indexes of the website which helps in delivering a better user experience for the visitors.
Analytics
Analytical cookies are used to understand how visitors interact with the website. These cookies help provide information on metrics the number of visitors, bounce rate, traffic source, etc.
Advertisement
Advertisement cookies are used to provide visitors with relevant ads and marketing campaigns. These cookies track visitors across websites and collect information to provide customized ads.
Others
Other uncategorized cookies are those that are being analyzed and have not been classified into a category as yet.
SAVE & ACCEPT